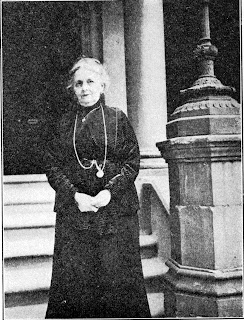 She was born in Bath England, and spent her early childhood there and came to London to study art under Legros at the Slade School. Her specialty was portrait painting, and her red chalk heads were quite remarkable, of which several were in academy; also portraits in the style of Dowman. Although she had painted many beautiful landscapes she practically abandomed this side of her art when she specialized particularly in miniatures. She came into the movement [the Baha’i Faith] in the summer of 1899 and went to ‘Akka soon after.

Miss Ethel J. Rosenberg was one of the pioneers of the Baha’i Faith in the western world in the early days of the Cause. ‘Abdu’l-Baha knew and loved so well this devoted servant of His and had often paid priceless tribute by voice and pen concerning her devotion and untiring labours.

Known and loved by all the members of the Holy family in Haifa and Akka where she had visited for months at a time in the earlier stages of the outpouring of the Baha’i spirit from the East to Europe and America (January 1901 and 1905-6), Miss Rosenberg played no small part in the adaptation of the Baha’i Message to the western mind. Ever modest and unassuming the full value of her work in this capacity seldom appeared on the surface but those who knew her well and were in close touch with her activities were and are well aware of the great assistance she gave to the Master and how valuable was the help she rendered in the translation and transcribing of some of the outstanding works through which the truths of the Baha’i Message were made known to the peoples of the western hemisphere.

She spent a certain amount of time studying Persian but other interests prevented her mastering the language. She spent considerable periods of time in Paris working for the Movement. She went to Haifa several timcs, at least three, and to America three times, spending many months there. She went to America with Mirza Abu’l-Fadl and stayed with Mrs. Phoebe Hearst. In the first days of the Cause in Great Britain she interested many people; some of the most important members of the Movement came to her for her valuable advice and her assistance in English, as she herself had a very easy and pleasant style. She did a great deal of speaking in the early days and addressed large audiences. She did some writing, also, about the Cause. She was of great assistance to all of the young Persians and had a very extensive correspondence in the East. She was for many years one of the most, if not the most, active workers of the pioneers of the Movement in England.

The outstanding point in her life in connection with the Baha’i Cause, was her intimate, personal knowledge of the Teachings. These she heard direct from the Master’s lips on her several lengthy stays in Haifa. She often read from her personal notes at the Baha’i meetings. She gave life-long devoted service to the Baha’i Cause in the British Isles.

She had profound knowledge of the Bible and also of other sacred books. Also a great knowledge of general literature. Her English was very good and her French nearly perfect. Her great work was in correcting and editing the writings and translations.

No one is more fully cognizant of the worth of this servant’s labours for the Cause of Baha’u’llah, as developed and expounded by she Center of the Covenant, than the beloved Guardian of the Cause, Shoghi Effendi, who, when he was advised of her passing cabled forthwith to the friends in London a heartfelt message of condolence and appreciation.