Agnes Parsons (1861-1934) – She arranged the first “Amity Convention”, termed by the Master "the mother convention", for unity of the colored and white races in America 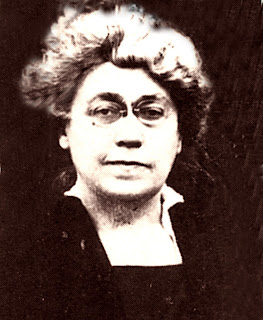 "The dress was destroyed, but the one who wore the dress is living." These words are part of a wonderful teaching on immortality which 'Abdu'l-Baha gave to Mrs. Parsons when she supplicated for a word from Him for a friend who was inconsolable because of the passing of a dear one. It seems appropriate now in connection with the going away of our dear sister herself, for in this world "she proved herself worthy of the implicit confidence reposed in her by 'Abdu'l-Baha," as stated in the cable about her from our Guardian.

On Friday, January 19, 1934, at about six p.m., Mrs. Parsons was crossing a street alone and was knocked down by a passing automobile. A serious illness followed, and finally on Tuesday night, January 23rd, about midnight, she ascended to the world of eternal, radiant light and life. "The human spirit comes from God and to Him it returns."

Mrs. Parsons, we are informed, had reached the age of seventy-three years, a long and eventful life which, as far as all earthly measurements are concerned, seemed full of promise for many more years of service.

The only child of General a d Mrs. Royal, Mrs. Parsons was born into and lived in what at that time was considered a beautifully sheltered world. Until middle age when she first became a Baha'i she had never known nor associated with anyone outside of her own immediate circle. The absolutely miraculous creative effect of the Revealed Word of Baha'u'llah was never more pronounced than in the unfoldment of this great soul into a devoted and loyal follower of the Risen Sun of Righteousness and Truth.

Mrs. Parsons first heard of the Baha'i Teachings around 1908, and became a confirmed follower of the Baha'i Revelation when she made her pilgrimage to see 'Abdu'l-Baha in Haifa in 1910.

Our recorded Baha'i history gives abundant proof of her outstanding service to the Cause in 1912 when 'Abdu’l-Baha was in Washington. There is no statement which anyone could make which would sufficiently glorify her for the magnificent services which it was her privilege to render at that time. It was Pure Bounty from God the Almighty to her that she was able to offer to 'Abdu'l-Baha the hospitality of her new home during the greater part of His first visit to Washington in the spring of 1912. Everyone who witnessed her indefatigable work can whole-heartedly testify that she left no stone unturned to make her service perfect at the feet of the Lord. 'Abdu’l-Baha Himself testified to this fact.

Some of the marvelous talks which ‘Abdu'l-Baha gave in her home are recorded in the "Promulgation of Universal Peace," but there were many private interviews with individuals and groups from the official and social circles of Washington which have never been printed. Many of the details of the Master's visit have been written by Mrs. Parsons herself, and no doubt this important document will be included in the history of the Cause in America. [Her Diary was published in 1996 as “’Abdu’l-Baha in America, Agnes Parsons’ Diary”]

In. August, 1912, 'Abdu'l-Baha visited Dublin, N. H., where Mr. and Mrs. Parsons maintained their summer residence. Here Mrs. Parsons turned over to 'Abdu'l-Baha for the exclusive use of Himself and His entourage, one of her places there known as "Dayspring." Thus two of her homes -- one in Washington and one in Dublin -- will forever be mentioned in the Baha'i history of this country. During His stay in Dublin, 'Abdu'l-Baha talked again to many individuals and groups of great importance.

'Abdu'l-Baha often referred, during these times, to Mrs. Parsons' spirituality and to her significant services m the Cause of God. That she was "called" to render this service and that she so whole-heartedly and graciously and happily arose and translated into the world of action all those instructions both subjectively and objectively received, shows that she was confirmed.

From that time on Mrs. Parsons gradually began to serve very definitely in the Cause, for the most part giving the Message to groups in her own immediate circle. Traveling teachers who came to Washington always received an invitation to speak to these groups in her home.

Her second visit to the Presence of the Master in Haifa Palestine, was made during the winter and early spring of 1920. During this second visit she received from ‘Abdu'l-Baha a remarkable instruction – a command -- which, carried into execution, placed her in the ranks of those who rendered pioneer services to the Cause. "The blessings that come to one are greater than those one seeks," said 'Abdu'l-Baha. This instruction was not sought by Mrs. Parsons; it came to her from the heaven of the Master's Divine Will, and was in truth and in fact a great and overwhelming surprise to Mrs. Parsons herself. The Master's instruction was as follows:

"I want you to arrange a Convention for unity of the colored and white races. You must have people to kelp you."

After Mrs. Parsons returned to America she often spoke of this command. In those days "to arrange a Convention" seemed a tremendous undertaking, 'but she always said: "I will be able to do it. I must for it is the Will of 'Abdu'l-Baha." And in accordance with the explicit command of the Master she succeeded in gathering around her a helpful, active and earnest committee.

During the period of preparation for this Convention (and the preliminary work consumed weeks and even months), Mr. Mountfort Mills was in Haifa. He returned to this country in time to serve as Chairman of one of the Convention sessions. At this meeting he read the following message from 'Abdu'l- Baha sent through him to be read at the Convention:

"Say to this Convention that never since the beginning of time has one more important been held. This Convention stands for the Oneness of Humanity; it will become the cause of the removal of hostility between races; it will be the cause of the enlightenment of America. It will – if wisely managed and continued -- check the deadly struggle between these races which otherwise will inevitably break out.”

Immediately after the close of the Convention Mrs. Parsons sent the following cable to 'Abdu'l-Baha: "Convention successful. Meetings crowded. Hearts comforted." And 'Abdu'l-Baha replied at once by cable: 'The white-colored Convention produced happiness. Hoping will establish same in all America."

The Tablets of the Master which followed, not only to Mrs. Parsons but to others, indicated that this first Amity Convention was termed by the Master "the mother convention" from which many Amity Conventions would be born, and in one Tablet He called it a perfect convention.

It is difficult to convey to anyone the full import of the work accomplished by Mrs. Parsons. One sees at a glance, even from this brief statement, that she was confirmed. The Master said to her:

"God has elected you and led you to the Kingdom of Abha, therefore you must be very grateful to God, the Bestower of these bounties upon you."

Any outline of Mrs. Parsons' services – brief or otherwise -- would not be complete without a word about her wonderful cooperation with the National and Local Baha'i Funds to the fullest extent of her ability; without mention of her many charitable and kindly deeds. Pages could be written doubtless about her contributions and helpful donations along many lines.

At the time of her passing she was a member of the Washington Spiritual Assembly, Chairman of the National Interracial Committee, and a member of the Interracial Committee of the Baha'is of Washington, D. C.
Mrs. Parsons had a unique station. Absolutely no one can fill her place. She had a capacity all her own, and her station was a particular one not conferred upon anyone else. She was very dear to the Master and He showed her great and extraordinary favor. Her place is empty; there is no one to fill it. Down through the ages her unique position in the Cause will be spoken of and written about, for a conferred position, conferred by the Master, can never die. (Mariam Haney, The Baha’i World, vol. V, pp. 410-14)