Mountfort Mills (d. 1949) – “that highly-talented, much loved servant of Baha'u'llah”; “that distinguished and international champion of the Faith of Baha'u'llah”; “our dearly-beloved Mountfort Mills”; first chairman of the National Spiritual Assembly of the Baha'is of the United States and Canada when formed in 1922; prepared the final draft of the Declaration of Trust and By-Laws adopted by the National Spiritual Assembly in 1927; was brutally assaulted in Baghdad while representing the Guardian to League of Nations regarding ownership of the House of Baha’u’llah 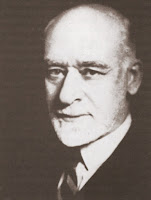 The passing of Mountfort Mills on April 24, 1949, deprived the American Baha'i community of the influence and experience of a very distinguished believer. He had been a follower of Baha'u'llah since 1906.

Before the end of 1909, Mountfort Mills had made two pilgrimages to 'Akka. His third pilgrimage to visit the Master was made early in 1921. In 1922, with Mr. Roy C. Wilhelm, he was invited by Shoghi Effendi to go to Haifa for conference with the Guardian on matters related to the new conditions created for the Faith by the Ascension of 'Abdu'l-Baha.

During the Master's visits in New York during 1912, Mr. Mills served on the Baha'i reception committee which arranged public addresses for 'Abdu'lBaha in that city. First chairman of the National Spiritual Assembly of the Baha'is of the United States and Canada when formed in 1922 in accordance with the provisions of the Will and Testament left by the Master, Mountfort Mills was elected a member of that body for seven terms between 1922 and 1937. As trustee of Baha'i Temple Unity he had served annually from its inception in 1909.

The final draft of the Declaration of Trust and By-Laws adopted by the National Assembly in 1927 was prepared by Mills.


It would be impossible in brief space to report his activities for the New York Baha'i community throughout the years of his residence there, for the national Baha'i community, or in Europe. He was a winning public speaker and his personality gained many influential friends for the Faith in some of its most difficult days in the West. His devotion to the Master was impressive.

A few outstanding events will serve to indicate the unusual scope of his Baha'i activities.

At the Conference of Living Religions Within the British Empire, held in London, Mills represented the Baha'is on the public platform. His appeal of the case of the House of Baha'u'llah at Baghdad to the League of Nations, whose verdict was favorable to the Faith, is historic. The case is documented in earlier volumes of this biennial record. Mills made two journeys to Baghdad while studying the facts pertaining to the Baha'i rights to possession of a sacred Baha'i shrine confiscated by leaders of Islam. During this mission, acting on behalf of the Guardian, Mountfort Mills had audiences with the late King Feisal of 'Iraq, who assured him that the government would carry out the terms of the decision rendered by the League, an intention the King's untimely death made it impossible for him to fulfill. Mysteriously attacked while in Baghdad, Mr. Mills suffered a brutal assault the effects of which lingered for many years.

Mountfort Mills prepared the Resolution adopted by the National Spiritual Assembly for presentation to President Roosevelt with an engrossed copy of the Tablet revealed by Baha'u'llah for the heads of the Republics throughout America and a copy of the Master's Prayer for America. This document was reproduced in The Baha'i World at the time.

In Geneva, Switzerland, Mills spent much time during sessions of the League of Nations, serving as an unofficial observer and interested friend of its public proceedings, and exerted a good influence among many of its leaders on behalf of the Baha'i principles and ideals.

He was a member of the committee which appeared before the Wilmette Village Board to apply for a building permit for the House of Worship, at a time when the Baha'is owned land and possessed Mr. Bourgeois' design but from a worldly point of view seemed incapable of carrying out so impressive and costly a structure.

Characteristic of his influence upon people was his discussion with the late Professor Edward Browne of Cambridge University, translator of A Traveller's Narrative: the Episode of the Bab, the Persian text of which had been presented to Professor Browne by 'Abdu'l-Baha at the time of his famous visit to Baha'u'llah. After hearing Mr. Mills' explanation of the evolution of the Faith from the Bab to Baha'u'lhah, and its subsequent stages under the Center of the Covenant and the terms of His Testament, Professor Browne realized that he had been veiled by the preoccupation with conflicting claims and disturbances which followed the Martyrdom of the Bab. He expressed his desire to translate later Baha'i works, but died before this contribution to the Faith could be made.

Mills brought into the Baha'i community a trained mind, a gracious presence, a rare quality of friendly relationship and a keen awareness of the need of our time for the inspiration and guidance of a new Revelation. "As already intimated," the Guardian wrote on October 18, 1827, "I have read and re-read most carefully the final draft of the By-Laws drawn up by that highly-talented, much loved servant of Baha'u'llah, Mountfort Mills, and feel I have nothing substantial to add to this first and very creditable attempt at codifying the principles of general Baha'i administration."

In his letter dated March 20, 1929, reporting the favorable verdict pronounced by the League of Nations, the Guardian said: "I must not fail in conclusion to refer once again to the decisive role played by that distinguished and international champion of the Faith of Baha'u'llah, our dearly-beloved Mountfort Mills, in the negotiations that have paved the way for the signal success already achieved. The text of the Baha'i petition, which he conceived and drafted, has been recognized by the members of the Mandate Commission as 'a document well-drafted, clear in its arguments and moderate in tone.' He has truly acquitted himself in this most sacred task with exemplary distinction and proved himself worthy of so noble a mission. I request you," (addressing the American Baha'is) "to join me in my prayers for him, that the Spirit of Baha'u'llah may continue to guide and sustain him in the final settlement of this most mighty issue."
(Horace Holley, The Baha’i World 1946-1950)