Haji Muhammad Tahir Malmiri (1852-1953) - Father of Adib & Habib Taherzadeh; first pilgrimage in 1878 for nine months; second pilgrimage in 1914 for four months; author of the book: ‘History of the Martyrs of Yazd’; very active teacher of the Cause; noble life of service; had memorized almost half of the Qur'an; extremely well-versed in the Bible and the books of other religions; received Tablets from Baha’u’llah, ‘Abdu’l-Baha, and letters from the Guardian 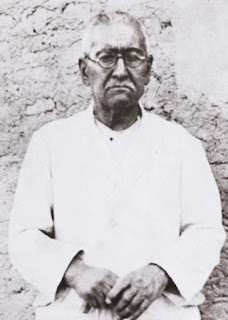 Haji Muhammad Tahir Malmiri lived, labored, and passed away in the ancient town of Yazd, Iran, a town notorious for its religious fanaticism and its large number of mullas. He was born there about the year 1852 which witnessed the inception of the mission of Baha'u'llah, and lived there long enough to see the centenary celebration of that Holy Year.

Known to almost every citizen, no other Baha'i in Yazd was so dearly loved and admired by the friends, and so bitterly denounced and insulted by the foes. Fortified by his staunch faith, animated by his intense desire to serve the Cause, sustained by the guiding Hand of Baha'u'llah, undaunted in the face of dire sufferings, his life and conduct served to perpetuate the spirit of the apostolic age to which he belonged.

His life was wholly dedicated to the Cause. The idea uppermost in his mind allways was that of teaching. No power, no preoccupation, no conventional matter of daily life could ever deflect him from this high purpose. His teaching exploits were so intensive that today, a large section of the Baha'i community of Yazd owes to his lifelong effort its allegiance to the Cause.

Haji Muhammad Tahir was a brilliant debater and speaker. It is difficult to convey the pleasure one derived from his inspiring conversation which ranged from humorous trifles to weighty pronouncements. His knowledge of the history and literature of the great world religions was prodigious. He could recite almost half the Qur'an by heart, as well as hundreds of recorded Muslim traditions. Also he was extremely well-versed in the Bible and the books of other religions.

The source from which he drew his energy seemed to be inexhaustible. He could speak for hours about religious matters without either feeling tired himself or boring his listeners. Rather they were fascinated by the gaiety of his conversation and by the ripple of his ready and eloquent tongue. Even the enemies of the Cause were silenced and subdued by his charm and dignity.

On several occasions fanatical persons, intent on carrying out sinister plots against his life, came to his fireside meetings in the guise of seekers of truth, carrying weapons in their pockets. After coming in contact with his dominating personality, however, they changed their minds altogether, and strangely enough, a couple of them eventually became ardent believers.

But Haji Muhammad Tahir's talks were not always honeyed. There are few, if any, among the leading Muslim priests in Yazd who, at one time or another, have not felt the sting of his taunts and retorts or were not drawn into his entangling net, only to emerge with their wings clipped, utterly confounded by the amazing force of his argument.

At the height of his teaching career, almost every evening he used to attend fireside meetings which usually lasted till after midnight. Whenever he was free at night or returned home rather early, he would keep awake well into the small hours of the morning, either pacing the compound of his modest house in prayer and meditation or sitting up to read or write.

His pen was as ready and able as his tongue, and his voluminous writings are direct, lively and inspiring. Famous among his works is the ‘History of the Martyrs of Yazd’, a moving portrayal of one of the most revolting episodes in Baha'i history. His Memoirs, written during the second World War and containing a wealth of choice reminiscences, has been designated by the beloved Guardian an interesting storehouse of information for future Baha'i historians. Another enduring work, undertaken at the behest of the National Spiritual Assembly of Iran, is the history of the inception and growth of the Faith in his native district. Compiled in two volumes, it depicts the lives, achievements, sufferings and martyrdom of the early heroes and pioneers in that area. Also his ‘Fusul Arba'ih’ is a masterly exposition of proofs demonstrating the prophetic mission of the Founder and Herald of our Faith with profuse quotations from various religious books used in support of his thesis.

The crowning glory of his life was the rare privilege of attaining the presence of Baha'u'llah in the year 1878 in 'Akka, where he stayed for about nine months. The wonderful events and experiences associated with this momentous pilgrimage, no less than his contact with the mysterious power emanating from the person of Baha'u'llah, made a deep and abiding impression upon his whole being and served him as a source  of inspiration and spiritual enlightenment, enabling him to steer his way steadily and  triumphantly amid the perils and cross currents of his eventful life.

The remarkable feature of his interviews with Baha'u'llah is the fact that overcome by His dazzling greatness, he seldom dared to look at His Face or to utter a single word. Rather he would approach Him in a sense of spiritual discernment. In his thrilling Memoirs he states:

"Whenever I came into the presence of the Blessed Beauty if there were anything I wanted to ask, I would say it by way of the heart and He would answer me invariably. I was so deeply impressed by His supreme power that I always sat in His presence spellbound, oblivious of myself."

Once he entreated Baha'u'llah that he might be granted the privilege of laying down his life for the Cause as a martyr. "You shall live long to teach the Cause," was His prompt reply. In fact he did live long - a hundred years - and did distinguish himself in teaching and serving the Cause with exemplary devotion.

The wonderful Tablets revealed in his name by both Baha'u'llah and 'Abdu'l-Baha and the letters from the beloved Guardian, all bear ample testimony to his noble life of service.

Early in 1914 Haji Muhammad Tahir went on his second pilgrimage to the Holy Land where he basked for four months in the sunshine of 'Abdu'l-Baha's unbounded blessings and love.

Rank and fortune, in the material sense, never came Haji Muhammad Tahir's way. He used to earn his modest living mainly by working as a hand weaver. Yet, whenever he managed to secure some bushels of grain or other provisions for our daily use, nobody was allowed to touch them until he had set aside a substantial portion for the poor of the town as well as the needy among the martyrs' widows and orphans.

After the terrible Baha'i massacre in Yazd which occurred soon after the turn of the century, 'Abdu'I-Baha appointed Haji Muhammad Tahir to look after the hapless, terror-stricken remnants of the martyrs' families. For several years he devoted himself to the arduous task of organizing help for the poor, comforting the bereaved, tending the sick, and rearing and educating the children. He derived ample pleasure from giving food, money and clothing to the needy and distressed. Everybody was welcome to his home and his table. The words of praise and admiration which streamed from the Pen of 'Abdu'l-Baha in appreciation of his beneficent work stand as a glowing testimony to his sense of love and devotion to the downtrodden.

Throughout the rugged years of his life Haji Muhammad Tahir seems to have joined in permanent wedlock with adversity.  The lifelong sufferings he bore at the hands of the enemies, the insults and indignities to which he was subjected at every turn, the  perilous adventures he went through, the grievous loss of three children who perished  during the Baha'i massacre in Yazd, the weight of chains and imprisonment he joyfully  accepted towards the end of his life in company with the fellow-members of the  Spiritual Assembly of Yazd - these together with many other distressing events, far from  dampening his spirits, served to steel his energies and to reveal the true measure of his indomitable faith .

The evening of his life was dimmed by years of declining faculties and infirmity. Sinking beneath the gathering weight of old age and ill health, he laid down the burden he carried so worthily for nearly eighty years and passed away peacefully at his home on June 4, 1953. In his will he bequeathed all his possessions to the Cause. The following gracious message from the beloved Guardian may well serve as a befitting epilogue to his memory:  "Grieve passing Muhammad Tahir Malmiri long record services unforgettable praying progress soul kingdom."